The chapter below is from the sci-fi, triller book Fear is in the Air by Eva Newermann

The corpse is still nice and warm. His eyes are wide open.

Actually, he is a nice-looking guy. Too bad he had brown eyes. I hate brown eyes!

My name is Ewa Lowe. I work as a flight attendant. Today is my 25th birthday; of course, I had to celebrate it with a kill.

It sounds like machine guns letting off several bursts of gun fire, but it’s only the thundering sound of the rain drops hitting my rental car.

A rainy day is a good time for a kill. Then most of the evidence is washed away, making it difficult for the forensics people.

He is lying on his back in the sand all wet from our skinny-dip. The ocean and rain feel warm on my bare body. The temperature is 26 degrees Celsius. To me, it’s a perfect day in Egypt.

I met the now-dead Pharaoh serving him on my flight last night. He made an easy prey with his black hair, ugly brown eyes and tall, slim body. He told me he was in the middle of a bad divorce.

That was fine with me. Then he would not tell anybody he is fooling around. Too bad he didn’t know that any brown-eyed guy hitting on me ends up dead.

We agreed that I would pick him up the next day at 11 in the morning, two blocks from my hotel.

I took him to a remote beach I discovered driving around earlier that day.

Amazing how easy it is to lure these men. Even to a beach in pouring rain. Just promise them sex and they follow like lambs to the slaughter.

I gave him Rohypnol, the date rape drug. After the September 11 attacks, the security checks at the airports are tight. I have to hide the drug in my birth-control kit. The pills fit perfectly into the little wheel. Usually the only comment I get from the security guys when they look at it is: ‘Better to be safe than sorry,’ said with a smirk.

I put three pills in the Pharaoh’s wine before our swim. I know exactly how long it will take before he’s paralyzed. The first sign is that he gets groggy, so I get him onshore. He collapses and then I am free to do whatever I want.

In my purse I have some razor blades and latex gloves. After putting on the gloves, I run my fingers through his wet hair and neck. I put his arms on his stomach. Then, I take first his right then his left wrists and cut them, upwards, real deep.

I pull his arms out, so that he is lying in the Jesus crucifixion position. I drop the razor blade on his stomach.

Some of the blood is running down his groin. I get some blood on me, but that is going to be easy to clean, since I’m naked.

After another dip in the ocean I see that life is running out of my Jesus, my Pharaoh.

“Exsanguination. Isn’t that a beautiful word?” I say it canorously, tunefully.

I lie down next to him in the sand, in the same position he is in.

“Exsanguination!” I call out in a singsong voice, “That’s the medical term for bleeding to death.”

I am drifting into something familiar…. A spine tingling desire is running through me. A shiver crawls along my skin.

Suddenly, it turns into an electric shock, knocking me even deeper down into the sand. This is the trauma of my sordid, secret past, catching up with me. My body shakes and it feels as if I’m going into an aphrodisiac spasm.

After a while I feel normal again. I look at my dead Pharaoh.

The rain feels good, like Holy Water on my body. Oh, this is so great; it’s giving me goose bumps, or it’s giving me cutis anserine. I like these medical terms.

They might think it’s a suicide since he is so depressed about his divorce. With some luck he wont be found for 80 hours, then there will be no trace of Rohypnol in his body.

Hope they have some lousy Horatio Caines here in Egypt’s C.S.I.

I peel off the bloody gloves and stuff them in a plastic bag, then I put on some new gloves. The wine bottles, paper cups and gloves will be thrown into different garbage containers on my way back to the hotel.

I toss his wallet far into the ocean and cover him with some branches; that will probably delay identifying him.

I will be out of the country this evening. My flight is to Norway. Oh, yes, many tall, blue-eyed guys in Norway. I’m looking forward to that!

I walk 15 minutes to get back to my rental. I always park the car where other cars have been driving, even though in this rain I really don’t have to worry about my foot prints or tire tracks being found.

I’m wearing a dark brown wig it’s soaking wet and I place it in a plastic bag. Well, at least my own hair is dry. A few tosses with my hair, some brushstrokes, a little lipstick and I’m on my way.

Not that I am happy to be on the road with Cairo’s five million people, all driving like maniacs.

Remind me never to rent a car in Cairo again. Driving back to the hotel is a nightmare, I don’t think any of the drivers in Egypt have ever passed a driving test or taken any lessons. Whoever drives fastest, honks his horn the loudest, or screams highest out the car window rules!

To block out some of the noise I plop in my favorite CD and turn the music up, loud. I have had these songs specially made for me.

Three years ago I met the Norwegian singer and musician Frode and we became friends. I asked him to record a CD containing specific songs.

I told him the first and the last song on it should be ‘Love is in the air,’ but I had Frode sing the words ‘Fear is in the air.’ ‘Brown-eyed girl’ became ‘Blue-eyed girl.’ ‘Killing me softly with his song’ became ‘Killing you softly with my song,’ and so on. I think you get the picture….

So here I am, singing along, driving in crazy Cairo.

I have been in Cairo once before as a tourist. On the agenda then were sightseeing tours to the Valley of the Kings, the Temple of Karnak and the Pyramids of Giza.

Yesterday I went to the Cairo Egyptian Museum. I wanted to see the golden mask of King Tutankhamen, popularly called King Tut. It was an English archaeologist, Howard Carter, who discovered the tomb in 1922. He had been trying to find it for five years.

Carter’s father, Samuel, was an artist. He taught Howard to paint and draw. I think we all can be grateful that Howard started excavating instead.

King Tut was born in 1341 B.C. They think, after DNA analysis, that he was probably killed by an infection or malaria, in 1323 B.C.

The museum was packed with people. Everyone was trying to get into the room where King Tutankhamen’s mask was on display.

We passed a life-sized ebony statue. This statue guarded the treasure room of the tomb. Many people who have been in contact with the tomb have died mysteriously. This phenomena has been called the Mummy’s Curse. Legend has it that anyone who dares to open the tomb will suffer the wrath of the mummy.

My dead Pharaoh suffered the wrath of Ewa. Let’s just hope I don’t get any angry mummy chasing me.

After an hour in line I could finally gaze at the unique funerary mask of King Tutankhamen. The gold, glass and semiprecious stones glitter in the soft spotlights. It sure was worth the wait. I could probably spend days in the museum and still not be able to see everything.

I’m staying at a hotel named Mena House Oberoi. What a beautiful place! It’s only a five-minute walk to the Great Pyramids of Giza. My room has a balcony with a breathtaking view of the pyramids.

Back in 1869, when the hotel was built, it was called Palace Khedives Ismail. It was used as a palace for the prince and his hunting buddies. The hotel is an oasis of elegance and luxury.

One of the restaurants, Khan El Khalili, has a view of the pyramids. In the evening when the pyramids are illuminated, it’s a sight you will never forget.

When I arrive back at the hotel I meet Lovise and the captain in the lobby. Lovise is our youngest flight attendant. She is a friend of my brother’s wife, Irene and they invited her to their wedding in Las Vegas. Lovise is a hard worker and always in a good mood. I like her a lot.

She pulls some pictures out of her purse. “Look, Ewa, the pictures you took of me by the pool with the pyramids in the background turned out great!” 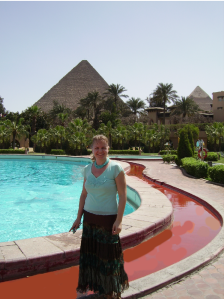 The captain, already in his snappy uniform, is looking at the pictures too. “Did you know there was this American who had a scam going on to sell the pyramids to the highest bidder?”

We all start laughing.

“Oh, that’s nothing,” I say, “another American is selling off properties on the Moon, so far he has probably made millions. I thought this was such a clever and fun scam, I sent him my hundred bucks. So now I’m the proud owner of one acre, named Stargate, on the Moon, and I have the deed to prove it!”

“That could only happen in America.” The captain is grinning. “Ewa, we missed you last evening. I tried to call you before we went out for dinner, but this bird has flown, like the Beatles sang.” The captain loves the Beatles.

I laugh, “Clever of you to quote something from ‘Norwegian Wood,’ since we are flying to Norway today.”

“Sorry I couldn’t join you,” I say, with a smile, “I have some friends in the city and we went out for drinks, but now I have to get dressed. See you in the limo.”

I tick my finger at him, “Naughty, naughty,” and run upstairs.

The chapter “Egypt May 16, 2003” is from the book “Fear is in the Air” by Eva Newermann. Available on Amazon Kindle and Apple Books